Remember all of those hours playing Unreal Tournament, Doom, and Quake multiplayer?  I remember those times with such nostalgia that I’m always on the hunt for a game to reproduce those moments for me.  I ran across this one and as a FTP base game, I had to give it a try. 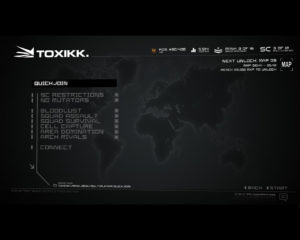 There are many modes to choose from:

All of the modes should be very familiar with quick twitch FPS fans, no need to go into detail about each one.  Squad Survival is an interesting one, though.  No respawns, no mid-round joins, and no map pickups at all.  Each player is fully loaded at the beginning of each round.  This is a fun take on deathmatch.

The first problem I had with this game is the lack a player base for this game release last September. 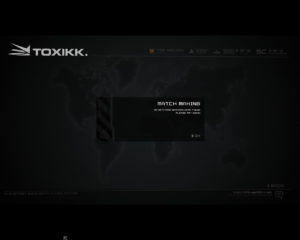 All modes aren’t really playable all the time.  You can reduce the amount of specifics in your server search, but I still had trouble finding games in certain modes during primetime playing hours.  The tutorial was a nice edition.  There are 12 levels for the paid version of the game.  The first two showed you the basic movement tools and finished with a deathmatch versus bots.  They also let you blow a few up with the ultimate “Hellraiser” weapon. 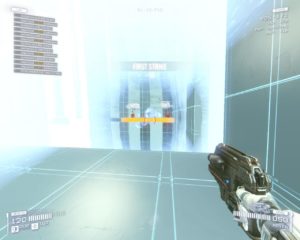 Besides the basic FPS controls, this game adds a double jump and quick boosts in all directions.  This makes this game extra twitchy.  There are two other interesting abilities as well.  “Q” will trigger a short-lived stealth mode.  Firing will take you out of it, but it can be very useful to put you in a better position for a firefight.  It can also allow you to perform some tricky escape tactics.  I used it once to let me pursuer pass as I fired a (lucky) rocket to his mid-section.  “F” will allow your player to pretend he is dead.  Your soldier will crumple all rag-doll like on the ground, hoping to lure your opponents into a trap.  Considering the game does not produce corpses after killing, this ability is extremely limited in practicality.  However, it is still fun to watch the rag-doll effects as your player is boosting forward. 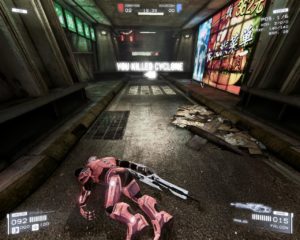 There isn’t too much noteworthy about the maps.  There are all built for Unreal Tournament style matches.  I did not find too much interesting about them.  The pickups are standard for this type of game.  Body Armor, medkits, weapons respawns, etc…  If you have played one of these type of games, you have played them all.  The height advantage wasn’t highlighted in team death match maps enough for me.  Everyone plays on the same playing field somewhat. 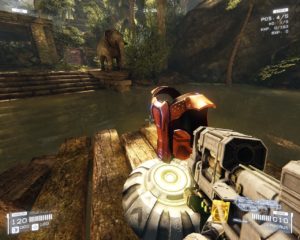 Another not so noteworthy addition.  They all make sense, but they all have been done before over and over.  Sniper, rocket launcher, shotgun, flamethrower, rifle, and the rest.  The stingray shoots with a slow hitscan primary and a laser shot as a secondary.  There isn’t anything we haven’t seen before.  Rockets are king once again, unless you are ruthless with the sniper rifle.  Headshots seems to be in low commodity in this game.  The critical zone is not very large. 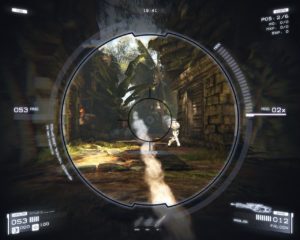 If you’re looking for a Quake-style FTP, this will fill the need for a little while.  If you’re looking for any type of innovation to this genre, this won’t get your gears turning.  I had fun while playing it, but I probably won’t be back for more.  I always like to throw a video out there, but these is a lack of content in uploads for this game.  Here is a Hellraiser shot and a quick clip from Shroomy on youtube: