You’re on a strange planet with a pistol, there is some sort of generator next to you, some sad defensive structures near you, and cameras watching you.  Well then that must mean you’re on the top rated gladiatorial battle show being shown all over the Universe!  That’s the setting for this tower defense action shooter.

The core concept of this game is do you put your money into your defensive structures or do you invest in your own weapons, gadgets, and special abilities?  It’s a question you’ll constantly ask yourself and the game will most certainly let you know if you made the right choice or not.  Most likely you saved one more round for a great weapon when you should have bought and now your dead.

Your strategy will depend on which game mode you are playing.  There are two main ways to play: Survival and Arenas.  Survival is an endless fight that goes on until you die, I spent over 30 minutes surviving until I just had to die because I had to leave.  That run almost put me in the top 10 leader board!  If you don’t play survival then you have your choice of three arenas, and I think these arenas are good areas to start.

Each arena has only 10 waves and ends with a boss fight.  The first arena is outside, second one you fight in the air and can fall to your death, the third is in a cave.  Each one is unique and will help you learn to master the game before being placed in the endless onslaught that is survival.

What I like about this game is that each time you play through it’s different.  Different mobs spawn, different combinations, mini-bosses flying through the air, and the bigger bosses are always in a different order.  This helps prevent the game from getting stale.

Let’s get into the defenses.  So waves come from the left and right side of the screen so you have two main directions to deal with.  My strategy in the beginning is to handle one side with my guns and then build up the defenses of the opposite side.  You can increase wall health, build two cannons on the wall, a giant auto turret that stands above it, and even add flaming ground in front of the wall.  All of these defenses can be upgraded to deal more damage.

As for upgrades for your character you do have quite a few selections for killing aliens.  In order of power you start with pistol, then can upgrade to machine gun, flamethrower, rocket launcher, then plasma cannon.  The plasma cannon has a long reload time but shoots a giant ball that bursts out into small balls and catches things on fire!  You can also boost your player health and get rocket boots to make you fly for a short time.  Very helpful for jumping over flying alien whales!

There are two other facilities you can build to add even more options.  One has mechanical items such as flying drones that shoot enemies, melee drones, mech suit, and upgrades for the suit itself.  In survival you’ll definitely have three flying drones and three melee drones by your side.  The other facility allows you to store three big “spells” you can call down during a wave to help turn the tide in your favor.  Lighting storm, missile strike, and the ability to heal all your buildings.  Trying to not die, kill aliens, and successfully call in these abilities can be tricky.

One thing you wont find in this game is detailed stats about weapons, upgrades, or defensive structures.  Sure there is a little description like “slow reload, massive damage” but no real stats to try and calculate anything.  This is fine, but it’s worth mentioning.  You also have no idea what to expect in the next wave, you just have to feel it.  This is why I do so frequently because I try to save just one more round so I can get a better weapon only to be thrown into a boss fight with a pea shooter. 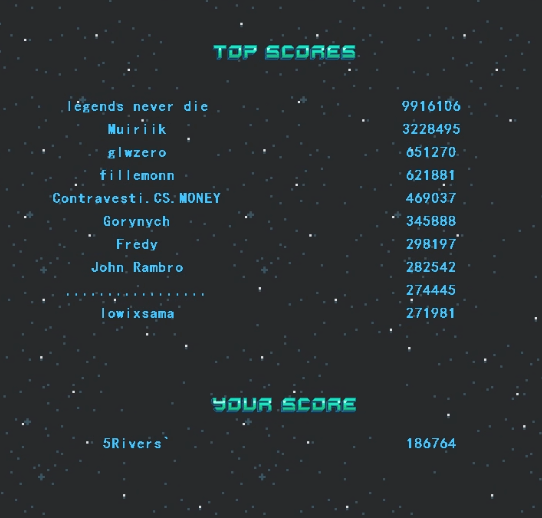 Maybe you think you’re better at killing aliens then most?  Well you can prove it on the leader boards.  Score doesn’t come from killing though, well not exactly, it comes from how much gold you have left and haven’t spent.  So anything you spend on defenses or weapons doesn’t count.  This makes it tricky but I guarantee to get on this leader board you will have bought everything possible and will just be spending money on those big spells I was talking about.  The game that got me 186, 764 took over 30 minutes and I ended up just having to die because I didn’t realize I’d still be alive!  This game is brutal and each play through is different but if you’re lucky you’ll make it to the leader board.

I enjoyed playing Pixel Gladiator and think the survival mode allows for some replay ability especially if you have an eye on getting to the leader board.  You’ll get frustrated along the way since each play through is different and one strategy won’t work twice but that adds something to the game.  Good luck out there space gladiator!

About Matt 90 Articles
I enjoy writing, learning about new games, and seeing what creative people are coming up with. The constant in my life has always been a passion for gaming so in my spare time I'm going to bring that passion to life here. I hope you enjoy.