Survival can be cruel on the island of pain and tears.  Tired of dying while trying to get decent loot?  Getting sick of surviving in a remote area with terrible weapons and armor only to be insta-killed 15 minutes in by a fully decked out super soldier?  Curious why the game title is completely capitalized (I am)?  Try these quick tips for living in adult hunger games.

Areas to Target for Looting

ShatterNL on the Reddit/Steam/PUBG forums has created a delightful map of risk/reward areas.

If you want to get great loot quickly, these red areas will do the trick.  Most top ten games that I have played do not come from landing in militarized zones.  Since this game’s loot in based on the almighty RNG, you can find loot elsewhere and not have to deal with multiple enemies right off the bat.  The areas I shoot for are typically towards the end of the plane’s route.  Players always are impatient and jump early, usually for red zones and cities.  A cluster of small houses like at M-C don’t have a chance at a sniper rifle, but will usually get you a set of basic armor and a serviceable weapon.  If you find this info helpful, the next tip will help even more to find loot.

Get a Car, But Don’t Get Attached to It

The above map by ShatterNL has vehicle locations, but their spawn chance isn’t 100%.  But this map is always a good idea to throw up on your second monitor for those likely vehicle spawn locations.  As soon as you get your basic loot, find a car or jeep (hopefully) and drive to another location within the circle to loot.  There are two options for your destination.  The edge of the circle will typically have a better chance of catching others and getting the jump on them.  Travelling in the center area of the circle has less combat, at least that I’ve noticed.  Find areas with closed doors, but beware.  Approach quickly to the compound, but open doors and clear house cautiously.  They will have no doubt you are coming based on the 1972 Dacia you drove up to it. 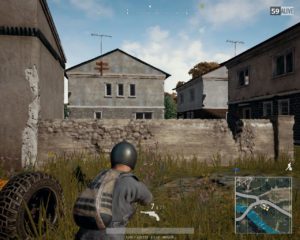 As an extra motion of being careful, crouch and hold left control to crouch-walk.  Then listen for footsteps in the building.  Don’t stand still for very much time.  Good players always wait for the right opportunity to start lighting you up and are looking for those headshots.  Now you should be semi-ready for the mid-end game, but more loot is always good.  Drop the car after being in the circle if you want to be stealthy for the end game (I do).  Although, there is a video by Valefisk of only using a car…….

Don’t Be Too Afraid of the Circle

This mainly applies to the first couple circles.  It is by no means a death sentence.  I’ve ran across half of the map beyond the safe area and have been fine.  It is not an area to dwell in, but being under-looted during the mid game can find you looking for an advantageous kill to better your chance of survival.  Don’t panic, drop a couple boosts.  Heal when your bar is really low and you’ll be fine.  Just understand that as each circle passes, the penalty will increase.  The final couple circles will do their best to end you.

You can actually get a good distance away from the plane after jumping.  To get to the ground as fast as possible, just look down and hold W.  The opposite is true when trying to get farther away.  Look up as high as you can in the direction you want to travel and hold W. 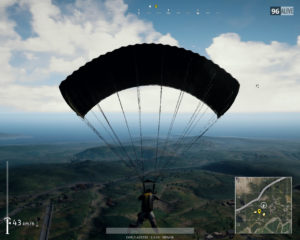 To get really far, you can always open your parachute early.  To get the most out of your chute, aim up as far as you can.  Then hold W to get your speed up to ~50 km/h, and then release to continue to get some distance.  Continue to do that and the whole map opens up.  If you open your chute up too early trying to get to a high traffic/heavy loot area, beware of players on the ground looking up at a floating baby duck in the sky (you).

These are some basic tips for survival for the most addicting game I’ve played for a while.  Keep on your toes and stay hungry for that chicken dinner!